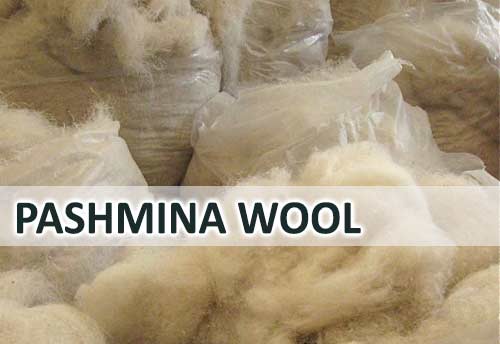 With this initiative the Pashmina wool products of Leh-Ladakh and Jammu & Kashmir, will now be woven in Varanasi also, said the press release.

This is the first ever attempt to introduce the heritage craft of Pashmina weaving outside J&K and familiarize the artisans in the rest of India with this unique art.

These four Khadi Institutions of Varanasi division have started processing of raw Pashmina wool in Delhi.

Nearly 200kg of Pashmina wool processed in Delhi will be supplied to artisans in Leh by the first week of December. These Leh artisans will spin the wool by December-end that will be brought to Varanasi for weaving. The two artisans coming from West Bengal are highly trained in making Muslin which involves ultra-fine weaving which is very much similar to the weaving of Pashmina.

These KVIC recognized Khadi institutions have started procurement of raw Pashmina wool from Leh-Ladakh and brought it to Delhi on 15th November for processing that is de hearing and converting it into roving. The roving will be sent back to the Khadi artisans in Leh for spinning, who have been provided with 100 new model charkhas by KVIC, said the press note.

The development comes after a meeting of Chairman KVIC  Vinai Kumar Saxena with the Lieutenant Governor of Ladakh, RK Mathur recently where LG informed that around 50 MT raw pashmina is produced in Leh-Ladakh per annum out of which, after cleaning and processing, only 15 MT dehaired wool is actually produced for production of Pashmina wool products. Even in just 15 MT dehaired Pashmina wool, a meagre 500 kg quantity, i.e. 0.5 MT only, is utilized in Leh-Ladakh by a few small units for manufacturing of Pashmina products, which is causing loss of employment in Ladakh.

These Khadi institutions of Varanasi have purchased 500 KG of raw Pashmina wool from Leh recently and brought it to Delhi for processing, i.e. dehairing and conversion into roving. Saxena said, "This move will not only ensure utilization of entire quality of de-haired Pashmina wool of Ladakh but will also open new job opportunities for local artisans and availability of genuine and affordable Pashmina wool products in Varanasi. KVIC will provide online marketing support also to these khadi institutions. This will be a path-breaking initiative as the production of Pashmina would, for the first time, be done outside the J&K and Leh-Ladakh region.”

The processing of Raw Pashmina wool at Delhi was launched on 20th November by Chairman KVIC. The processed Pashmina wool would be supplied back to the artisans in Leh-Ladakh. The Pashmina Raw Wool Processing Centre in Delhi will ensure round the year supply of pashmina roving to the artisans in Leh-Ladakh where all activities remain suspended for six months owing to extreme cold.

KVIC, after one-month training, provided 100 new model charkhas of 8-spindle to the local artisans in 4 villages of Leh-Ladakh to start the spinning activities of Pashmina wool. These villages are: Likir, Saspol, Shakti and Leh city. These 4 institutions from Varanasi division have adopted the artisans and as a special case, have decided to pay INR 20 per hank spinning charges. At present, artisans working on traditional charkha in leh-Ladakh can produce only 2-3 hanks of Pashmina wool per day and earn less than INR 100 per day. But now on the 8-spindle new model charkhas provided by KVIC, artisans will produce up to 15 hanks per day and earn up to INR 300 per day.

Khadi artisans in Leh who have been provided charkha by KVIC, said this initiative of KVIC would ensure round the year work to us in Leh-Ladakh that would result in higher wages and our financial sustainability.

KVIC has also provided 25 high quality 48 inch width looms in Leh which will not only minimize the effort in weaving for artisans but will also produce all sizes of fabric. KVIC will further deploy more charkhas as soon as the work increases.