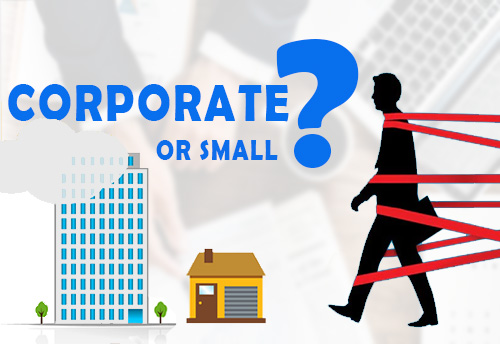 New Delhi, Aug 23 (KNN) The micro, small and medium enterprises (MSMEs) that are willing to move towards corporatization, find their hands tied up with the present provisions under the Companies act which scares away the entrepreneurs with high cost of compliance and heavy penalties, even imprisonment al slightest default.

This issue was highlighted by industry body FISME through a representation sent to Ram Mohan Mishra, AS & DC MSME.

The Federation of Indian Micro and Small & Medium Enterprises (FISME), a leading body for MSME associations in the country, has submitted a Memorandum to the DC MSME on how Companies Act in its present form is discouraging corporatisation of MSMEs.

Acknowledging that the government is taking a number of initiatives for the MSME sector, FISME said it has been encouraging corporatization of MSMEs by increasing transparency in operations and accountings which, in turn, will facilitate credit flow to and market access of, MSMEs by creating confidence in stakeholders.

In the Budget speech 2019, Finance Minister, Nirmala Sitharaman  raised  the annual turnover limit from Rs 250 crore to Rs 400 crore for availing a lower corporate tax rate of 25%,  to lessen the tax burden on companies. This should encourage corporatisation of MSMEs as, as companies they may have to pay lesser taxes than as proprietary or partnership firms.

FISME said, “The Companies Act in its present form discourages registration of unlisted firms as Companies, because of its lengthy procedures, time bound stipulations and  unreasonable punitive dictums.”

Accepting that the stringent provisions under the Companies Act, may be required to create confidence among the institutions and general public about the transparency in the operations of the Listed Companies, in which they invest their money, FISME pointed that out of nearly 1 lakh ‘public’ companies  registered under the Companies Act, less than 7000 are listed on stock exchanges and in the zeal of bringing highest level of transparency  in these listed companies, the same rigorous stipulations  has been extended to much smaller unlisted companies.

Some of the key issues pointed by FISME include high cost of registration of a Company, irrespective of the fact whether it is a large publicly traded company or an unlisted one; significant costs involved in the transfer of Registered Office of a Company, irrespective of its size, from one state to another; Application of same rigorous criteria for appointment of ‘Independent Director's for both publicly listed and unlisted companies and more.

Compulsory nomination of Key management Persons (KMP) by even unlisted Companies and imposition of same rigorous conditionality for acceptance of fixed deposits from ‘Public’ for listed as well as unlisted companies, alike are another key issues feared by the MSMEs.

FISME suggested that the Government should introduce slab wise registration fees with a nominal fee for the MSME Companies with share capital of say, upto 50 lakh.

Under the Act, Companies, even unlisted ones are required to appoint two independent Directors and under certain conditions a women Director.

FISME highlighted that the widespread shortage of independent directors registered  under the Act, make appointment of independent  and women directors difficult and costly for unlisted companies.

Further, Section 203 of the Companies Act, 2013 read with Rule 8 mandates the appointment of Key Managerial Personnel and makes it obligatory for a listed company and every other public company having a paid up share capital of rupees ten crores or more, to appoint whole-time key managerial personnel.

FISME suggested that while appointment of such key management personnel may be required for transparency and ensuring corporate governance in Listed Companies, such conditions for non- listed companies only increases the cost of conformity without serving any purpose for any stakeholder.

Deposits from Directors, Members and general public are essential source of funds for any Company. Under the section 76 of the Companies Act, 2013 and Companies (Acceptance of Deposit) Rules, 2014, elaborate stipulations have been made for acceptance of deposits by a Company, including getting credit rating of the company from a third party agency and intimating the same to the Registrar of Companies under specified format, etc.

This provision “..for unlisted companies only creates more difficulty in doing business by these companies, primarily Medium enterprises, without any perceptible benefit to anyone,” FISME suggested adding that the unlisted companies primarily accepts deposits from Directors and their relatives.