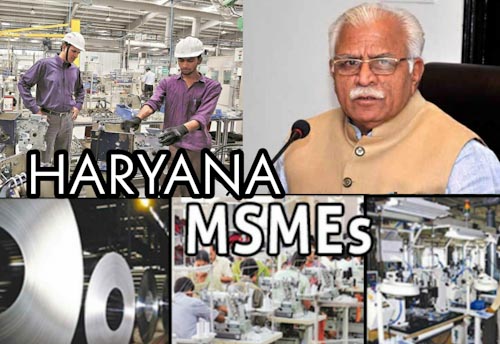 Gurugram, May 11 (KNN) In a bid to continue significant role of Micro Small and Medium Enterprises (MSMEs) in economic development, Haryana Chief Minister Manohar Lal Khattar has made several announcements to bring these units back on track.

During an interaction with representatives of MSMEs along with the members of all districts through videoconference here on Saturday, discussions were held on such as opening of an industry, labour issues and ease of doing business.

''In terms of opening of an industry, government has allowed one-time pass for a week, while for labour laws Khattar said that the state government will check other state government's policies than decide,'' said one of the attendees and a Sonipat-based businessman, Rakesh Chabra to KNN India.

''For overtime payments, Khattar assured that some way in between has to be sorted out as labour unions are not agreeing on flat rate but we will do something on this,'' Chabra added.

Khattar further informed that the Haryana government has written to the central government to waive Employees' State Insurance (ESI) charges for 3-6 months.

Khattar assured MSMEs that the state government is with them in this hour of crisis, as the COVID-19 situation had in particular dealt a blow to the MSME sector.

He said that Haryana has received a request from Jharkhand that one lac labour from there wants to come back to Haryana and requested units to start the work immediately to keep labour engaged.

''The Haryana Government has started a scheme for paying interest on the loan taken for salaries for 6 months. They will simplify it & new notification may come in a day or two,'' the Chief Minister avowed.

The other key measures announced by the Chief Minister in the VC include: setting up bank complaint information centres for redressal of issues related to banks, extending the date to deposit electricity bills without penalty till May 31, to provide state guarantee for bank loans to MSMEs from Small Industries Development Bank of India, fixing power rate at Rs 4.75 per unit for agriculture-based industries up to 20 KW, and pre-fabricated housing for labourers in the factories itself.