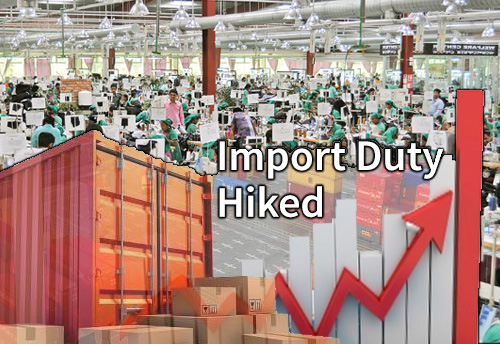 New Delhi, July 11 (KNN) A huge jump in duty free garment imports from Bangladesh under the free trade agreement has put the domestic industry under stress. This comes amidst slowing domestic demand and banks curtailing credit to MSMEs in the sector.

He is also the President of Federation of Indian Micro and Small & Medium Enterprises (FISME).

“There is a need for the government to look into it. Bangladesh wages are much cheaper and they have large production set up, they even have advantage to the cost of economy of scale. Also they have an advantage of the cheaper import fabric. The government has to think of saving the domestic industry either by putting some conditions on Bangladesh like using indigenous materials because Bangladesh is using the material source from other countries and making the garment and then exporting it to India,” he added.

Import of garments from Bangladesh was up to 82 % to USD 365 million last fiscal. It has been growing steadily at CAGR (Compounded annual growth rate) of 52 % and is expected to touch USD 3.6 billion by 2024-25. This will surely render about 10 lakh people jobless with most of the small garment industry shutting their shops.

“We are into a ruptured globalisation process now where everybody is looking out for their own” said Arvind Sinha, President of The Textiles Association told KNN India.

Ironically, export of garments from India to Bangladesh attracts a duty of 125 per cent, said Rahul Mehta, President of Clothing Manufacturers Association of India, at an event to announce the launch of 69th National Garment Fair.

The government should ensure that Bangladesh sources a part of its fabric requirements from India as putting a cap on their export looks difficult, he said.

Permal Udani, former chairman Apparel Export Promotion Council, said Bangladesh’s garment export was at USD 3 billion in 2005 and India’s was at 5 billion, but today their exports have touched USD 36 billion while India is struggling at USD 16.5 billion. (KNN/LM)