‘Creating and protecting trademarks can transform MSMEs into MNCs’ 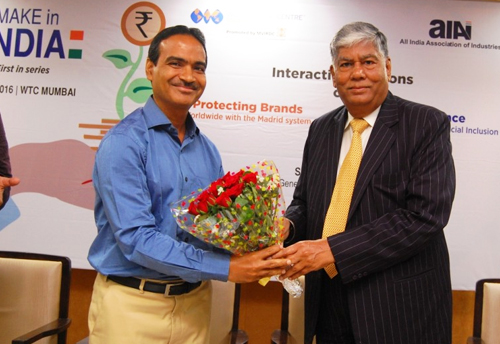 ‘Creating and protecting trademarks can transform MSMEs into MNCs’

Mumbai, May 5 (KNN) MSMEs must take advantage of the Madrid Protocol and protect trademarks of their products and services in 97 member countries by filing a single application in the Indian patent office, said O.P. Gupta, Controller General of Patents, Designs & Trade Marks & Registrar of Geographical Indications.

While addressing the keynote address at the event on ‘First in Series of ‘Make in India’ on Protecting Brands: Worldwide with the Madrid System’, Gupta said protecting the trademark is a way of growing one’s business and it is the pathway for MSMEs to become multinational companies.

“Creating and protecting the brands of Indian companies is a pre-requisite for the success of Make in India programme,” he said during the event jointly organised by All India Association of Industries (AIAI) and World Trade Centre Mumbai.

According to a press release by AIAI, R A Tiwari, Deputy Registrar of Trade Marks, informed that just by filing application in the Indian patent office, domestic companies can register their trademark in other member countries of the Madrid Protocol.

India became a member of the Madrid Protocol System in April 2013 and the system came into effect in July 2013. However, so far the Indian patent office received only 385 applications from Indian companies to register their trademarks in the member countries, Tiwari added.

Tiwari pointed out that the Indian Patent Office has received around 12,000 applications from foreign companies to protect their trademark in India.

Vijay Kalantri, President, All India Association of Industries and Vice Chairman, World Trade Centre Mumbai remarked, “Patent protection and access to finance are related issues as companies that own patented products have greater ability to raise credit from financial institutions.”

Kalantri also emphasised that the legal system in the country should be strengthened to handle the ever-rising complexity of patent regime.