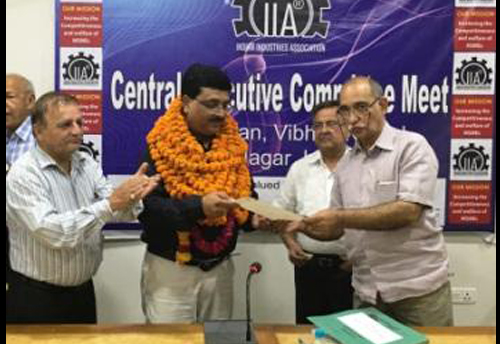 Lucknow, May 31 (KNN) The Central Executive Committee (CEC) of Indian Industries Association (IIA), an apex body for MSMEs in India, has unanimously elected Manish Goel as its National President for the year 2016-17. Goel has been elected as the President for the second consecutive year in a row.

Born in March 1965 in Kanpur, Goel is an entrepreneur who is successfully running his venture in the name of Lucknow Surfant Pvt. Ltd (Chemical Industry) and Lucknow Printers and Publishers at Lucknow, U.P.

Apart from running his enterprises successfully, Goel is actively involved in upliftment of MSMEs at national as well as state levels.

He has held several important positions in IIA starting from the Chairman & Divisional Chairman of Lucknow and then Secretary, Vice –President, General Secretary & Senior Vice President at IIA Head Office before taking up as its President.

Goel is a member of National Board of MSMEs operating under Ministry of MSME apart from several National and State level bodies related to MSMEs.

At international level, Goel is the Vice Chairman of Asia Brand Ceremony being held in Beijing, China in September, 2016.

On Election as President, IIA, in his first address Goel highlighted his priorities and said that he will work tirelessly for the promotion and development of MSMEs, expanding IIA Chapters to other States.

He vowed to continue the legacy of all IIA Past Presidents in bringing the name and fame to IIA and serve its members to their satisfaction. (KNN Bureau)