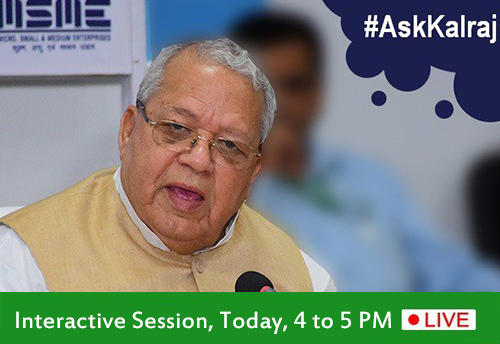 New Delhi, May 26 (KNN) On completion of two years of NDA government in office, Union Minister for Micro, Small and Medium Enterprises (MSME) Kalraj Mishra would interact with public today from 4-5 pm via twitter.

“Have an interactive session with me, tomorrow 26th May, 4:00PM, ask your questions using #AskKalraj via Twitter,” the Minister tweeted.

“Use #AskKalraj to ask your questions to Minister of MSME @KalrajMishra today at 4pm with @mygovindia,” according to a tweet by Mishra.

Government is organising a series of talks on Transforming India with Union Ministers to share the impact of various government initiatives across sectors.

Today is the fourth talk of the series which would be held with Union MSME Minister.

The live talk can be joined through https://www.mygov.in/talk/live-talk-shri-kalraj-mishra-transformingindia/. (KNN Bureau)