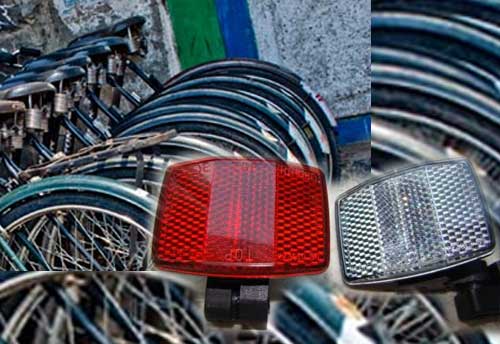 Ludhiana, June 13 (KNN) The Ludhiana based cycle industry which majorly consists of MSMEs has sought for more time from the government for installation of standardized reflectors in the bicycles stating that they are neither manufactured nor tested at reasonable rates  in India hence have to be imported from Chinese and Taiwanese counterparts.

The Supreme Court’s Committee on Road Safety has recently made it mandatory to install 10 reflectors qualifying ISO 6742-2 standards per bicycle.

It recommended to install four reflectors on pedals, two reflectors on front and rear wheel each, one reflector on lamp bracket and one on the rear mudguard latest by 1st of July 2016.

Talking about its implication on MSMEs,  Rajiv Jain, General Secretary of United Cycle And Parts Manufacturers Association (UCPMA) told KNN that keeping in mind that the small  and medium enterprises  in the bicycle industry are facing a hard time due to lack of resources and cut throat competition from China, the industry should be given more time to follow the order.

“All these approved bicycle reflectors according to ISO:6742-2 standards  are  to be imported from the China and Taiwan as both the countries manufacture and test these reflectors,” he said.

When the companies there were approached by the Indian SMEs with regard to their requirement for these reflectors, they asked for a minimum  time period of around 6 months  or more in order to process the orders of  these standardized reflectors, Jain pointed.

He highlighted the fact that only the 4-5  big players of the bicycle industry are ready with the resources required to meet the deadline whereas all the smaller enterprises still lack the monetary corpus, infrastructural layout and expertise to take on to the regulation  effectively before 1st July  and need some extension in this regard.

No legitimate manufacturing or testing plants for the reflectors qualifying ISO standards exclusively for the bicycle industry are readily available in India to help out these MSMEs, said Ashwani Ahluwalia, General Manager, R&D Centre for Bicycle & Sewing Machine, Ludhiana.

Only ARAI (Automotive Research Association of India), Pune and ICAT (International Centre for Automotive Technology) primarily deal with automobile reflector testing and could only help out testing bicycle reflectors at extremely high prices which again does not sound feasible for SMEs, he added.

He also said that both the centres, since they provide services to the auto industry, charge quite high to the SMEs for the reflectors.

Ahluwalia also said that efforts been put in place recently by the Centre in Ludhiana to establish the Testing Lab Facility there for which only the space has been finalized by now.

“The testing equipment are yet to be set up,” he noted.

“Thus, successful implementation of these standards requires the regulation to be extended beyond 1st July, 2016 and needs to be reconsidered by the Road Safety Council  so as to make it feasible and achievable by  the domestic industry,” he added. (KNN/ GK)