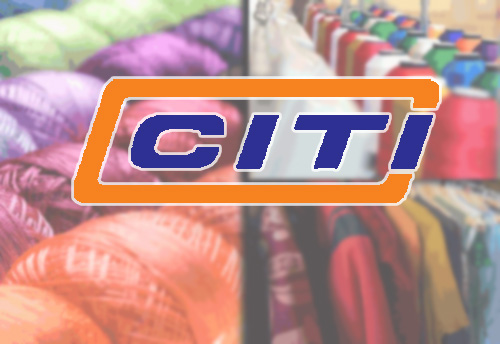 New Delhi, Aug 20 (KNN) | The confederation of Indian Textile Industry (CITI) has made a strong appeal to the Government to extend the benefits of currently announced Rebate of State and Central Taxes and Levies (RoSCTL) to the yarn and fabric segments.

In addition, CITI requested the Government along with Prime Minister Narendra Modi to help the textile industry to boost up its export competitiveness in the international markets to achieve higher growth trajectory and generate more employment opportunities to the masses, especially youths and women workforce.

He stated that CITI analysis of the quick estimates of exports of textiles & apparels for July 2019 shows that there is an increase in the exports of apparel while exports of cotton yarn and fabrics have declined by 9.98% and 10.54%, respectively on Year-On-Year and cumulative basis.

He further pointed out that the change in the trends of exports of apparel and cotton yarn/ fabrics is mainly due to the Scheme RoSCTL announced by the Government of India in March 2019 for the apparel and made-ups.

RoSCTL scheme has been introduced to provide reimbursement of Central and State Taxes to make sure that taxes are not exported along with the products.

However, yarn and fabric segments have been kept out of the same, hence both the sectors are at present suffering badly and exports are declining while others for which RoSCTL is granted have shown growth, CITI added.

It said that some categories like cotton yarn has seen a Year-On-Year fall of 35% in exports in the first quarter of the Financial Year while in June month only it was at a staggering 50% low.”

CITI Chairman also pointed out that there is a downfall in India’s position in global textile & clothing exports. India, which was the world’s second largest exporter of textile & clothing products in 2014-17 after China, fell to 5th position in 2018 as Germany, Bangladesh and Vietnam stepped in. Further, India is also witnessing a substantial increase in T&C imports during the past five years, according to data released by CITI.

He  further stated that the obvious reasons for lacking export competitiveness in the international markets are the high costs of raw materials and embedded State and Central taxes which are not refunded to the exporters at any stage, amongst others. This makes our intermediate and final products costlier.

The estimated calculations shows that cotton yarn and fabrics has non refunded taxes 5 to 6% of FOB value, and this is where Indian products lack export competitiveness to our immediate competitors like China, Vietnam, Indonesia, Sri Lanka, Bangladesh, etc. Many of our competitors, especially the Least Developed Countries (LDCs) have the advantage of differential duties in major export markets like USA, EU, China and India as well, he added.

CITI Chairman concluded by saying, India has all the potential to become a super-power in textile and apparel and is second to none in terms of technological advancement and quality of the products.

However, it requires the Government support through policy reforms to make it not only globally competitive but an epicenter -Make in India -for sourcing textile products, which is also one of the biggest dreams of our Prime Minister, he added.