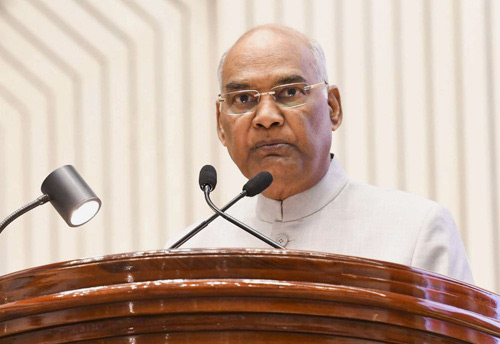 New Delhi, Jan 31 (KNN) Presenting 5 years report card of present government, President Kam Nath Kovind highlighted the key measure taken by the government during their 5 year tenure for the welfare and development of the country.

Let's have a look at some highlights from the MSMEs:

--- Earlier, it was almost impossible for ordinary entrepreneurs to supply their products to Government Departments. The Government has now developed an online platform called GeM i.e. Government e-Marketplace for public procurement. This platform has helped in bringing transparency in public procurement and at the same time has provided an opportunity to entrepreneurs in big and small cities as well as villages to sell their products without any difficulty to the Government.

--- Under the ‘Pradhan Mantri Mudra Yojana’, which facilitates credit for professional and business requirements, loans worth more than Rs. 7 lakh crore have been disbursed to the youth without any guarantee. More than 15 crore people have benefitted and over 4 crore 26 lakh first time borrowers have started their business under this scheme.

--- Under the ‘Pradhan Mantri Mudra Yojana’, the maximum benefit has been availed by women. Out of the 15 crore Mudra loans provided so far throughout the country, 73 percent have been disbursed to women entrepreneurs.

--- Under the ‘Deen Dayal Antyodaya Yojana’, about 6 crore women have become members of Self Help Groups. The Government has provided loans worth more than Rs 75 thousand crore to such Self Help Groups. This amount is two and a half times more than the loans given in the four years preceding 2014.

--- In order to facilitate self-employment, my Government has introduced wide ranging reforms, which are being appreciated globally. As a result of these reforms, India’s position has improved by 65 places in the Ease of Doing Business ranking, from 142 in 2014 to 77 now. This is an extraordinary achievement.

--- In the all-round development of the country, a pivotal role is played by small and medium entrepreneurs.

--- Government have created numerous new opportunities for enterprise for women and led to their empowerment and economic mainstreaming.

--- Women, who had been deprived of employment opportunities in the underground mining sector even after so many years of independence, will now be given equal opportunity to work in this sector.