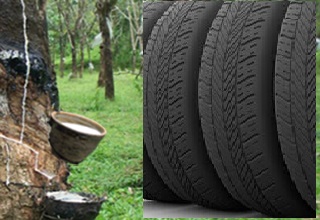 Price hike of natural rubber worries industry
Kochi, Jul 11 (KNN)  The SME sector is very concerned over the sudden steep rise in the price of natural rubber from Rs 179 to Rs 192 over the course of a week; as a similar rise had caused many units to shut down operations a couple of years ago.

According to reports almost 500 units had to close shop two years ago when the price crossed Rs 200 per kg and therefore the All India Rubber Industries Association (AIRIA) has now raised alarm bells.

The situation has been further complicated with the unavailability of rubber.

"This kind of a supply crunch when internationally natural rubber prices are falling has not been witnessed in a long time. We understand from the trade that due to daily escalating prices, growers are possibly holding the stock leading to non-availability and further increase in prices," said a media report quoting president of AIRIA Niraj Thakkar.

He thinks the situation is similar to what happened two years ago.  Besides, the cost of raw materials like chemicals and increased transportation costs have added to the problem.

"We have been able to procure only 40 per cent of our requirement of rubber in the last one month. While the Rubber Board had projected a production of 64,000 tonne in June, our interaction with dealers has revealed that approximately 30,000 tonne of it has been produced and released in the market. As a result, production schedules have been hampered," he added.

Consequently, the industry has renewed its demand for duty free import of natural rubber to make up for the reduced supply domestically.

AIRIA is a not for profit making body serving the rubber industry and trade with the objectives of safeguarding and promoting interests of the industry.  (KNN)