Reaction of experts from various sectors on Budget 2019 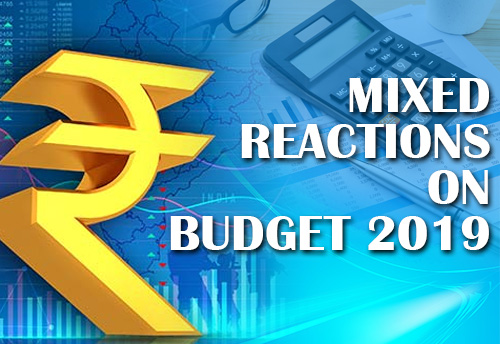 Reaction of experts from various sectors on Budget 2019

The budget has clearly shown that present government has set a long term vision for moving the country to cashless society. In transport payments, mentioning of an integrated transport card (Rupay Card Scheme) to make payments for multiple transport options is indeed a step forward. One nation, one card for travel will enable frictionless travel across the length and breadth of the country. This will bring down the use of cash drastically while travelling.

With the limited resources at her command, the FM has managed a balancing act. The effort to increase liquidity into the system and the focus on start-ups are two welcome steps. Efforts to make the Tax Regime simpler including Faceless Tax Assessment and streamlining GST Refunds are noteworthy. The focus on Infrastructure spending, on roads, railways, etc. as well as push for rural and urban housing has the potential to kick start industrial consumption and activity.

The primary focus of the budget has been on cranking up growth, job creation and improving the rural infrastructure. This is critical to the broader national growth, especially as the ongoing digitization is making India an ever-connected market. The Government has also pledged to create a payment platform for MSMEs for single-window filing of bills and payments. While making the process seamless for MSMEs and extending the purview of our formal economy, this will increase the digital footprint of MSMEs and thereby, ease MSME lending by creating superior visibility in the sector. We believe that India is making all the right moves in the right direction.

Primarily, the Indian start up community will soon be witnessing another wave of start-up boom  from rural geographies  as the Government will be launching a dedicated start up program on DD National, 80 Livelihood Business Incubators and 20 Technology Business Incubators for rural artisans. As a cherry on the top, a slew of reforms have also been introduced for Indian NBFCs including foreign investment, government guarantee for PSB loans, one-time six month partial credit guarantee to buy pooled assets, and quick loans of up to Rs 1 crore for Indian MSMEs. This is being done while also promoting research and development around avant-garde technologies including Artificial Intelligence and Big Data.

This Budget has come as a pleasant surprise for the EV industry as the announcements are more than what we were expecting. Initially, there were doubts in the minds of investors about the intentions of the Government in terms of EV industry, but the announcements made in the current year’s budget have definitely quelled their doubts. Also, with this budget Government has shown its commitment by making it amply clear that EV manufacturing is the next big thing in its vision. Now, it is the responsibility of industry to raise to the expectations of the Government and work towards more localization.

Overall the budget announcements look positive and people friendly. The new reforms like funds raised by start-ups will not require scrutiny of tax department is a positive move for start-ups apart from special programs that will be aired on Doordarshan for start-ups by start-ups will help in educating and motivating the budding entrepreneurs in semi urban and rural regions. I personally laud the move for an additional fund allocation at 2% interest for loans taken by MSMEs and this is a great move by the government.

This Budget included many development reforms for the Indian economy including developing skills resulting into creation of employment. In the interim budget earlier this year, already an allocation of INR 61,398 crore was announced for the health sector for the 2019-2020 fiscal which was a 16% increase in the last year’s allocation. This showcases that healthcare has a strong focus from the government. Under Swachh Bharat Abhiyan, the construction of toilets making more than 5.6 lakh villages Open Defecation Free (ODF) will also play a role in reducing many food and water-borne diseases getting spread.

Several initiatives and programmes are underway at the national level to position the country on its path to become a 5 trillion-dollar economy. The greater attention on infrastructure, road and sea connectivity, railway modernization, and aviation sectors will give a leg up to the economic growth and create new employment. The budget reinforces the government’s commitment to growth through investment and improving the social infrastructure of the country. The budget envisaged New Education Policy and the Higher Education Commission of India. These are the initiatives in the right directions as it is pertinent that we turn our focus immediately on empowering the youth with relevant knowledge and skills on par with the global standards and expand our research and innovation potential.

We are excited to see government’s continued focus on renewable energy. Promoting Solar enabled charging stations for Electric Vehicles and encouraging manufacturing of Solar Photo Voltaic cells under Make in India will boost the growth of Solar Industry. In addition to this we feel that an income tax benefit on the interest taken for solar installation would have helped in more adoption of the Solar power at residential and industrial level. (KNN/K)