Textile industry welcomes announcements made in the Budget 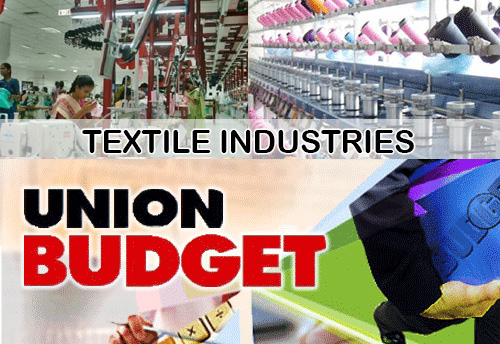 Textile industry welcomes announcements made in the Budget

New Delhi, July 6 (KNN) One of the leading industry chambers of the textile and clothing sector of India, Confederation of Indian Textile Industry (CITI) has welcomed the announcements made by the Union Finance Minister Nirmala Sitharaman and congratulated her for presenting a holistic budget aiming to boost not only the overall economy but also to uplift the socio-economic conditions of the people of the country.

Chairman of CITI, Sanjay K Jain was optimistic that the slew of positive announcements made in the budget speech will definitely help the inclusive development of the Indian economy and thereby the textile sector.

He further stated that the Minister has touched upon all the major aspects of the industry which can infuse confidence and growth in the Indian economy, such as, banking, infrastructure, logistics, power, farmer welfare schemes, etc.

The formation of National Research Foundation is a positive and welcome step and this would lead to more constructive and focused R&D in textiles, he added.

In the Budget, the grant for textile & apparel is budgeted at Rs 4,831.48 Cr which is about 30.41% lower than the previous year’s revised grant. It is mainly because of discontinuation of ROSL scheme from March 7, 2019.

The new scheme called Rebate of State and Central Taxes and Levies (RoSCTL) which was announced simultaneously will be issued through free transferable scrips, pointed Jain.

In terms of percentage change, maximum change in grant is for Integrated Wool Development Program which has increased by about 447% to Rs 29 Crore.

In terms of value, maximum grant is for procurement of Cotton by Cotton Corporation of India (CCI) under Price Support Scheme which is 118% higher than the last year to stand at Rs 2,017.57 Crore. It also has maximum share of 42% in overall grant for textiles.

There has been a slight increase of about 12.4% in amended Technology Upgradation Fund Scheme (A-TUFS) which is budgeted at Rs 700 Cr.

Grant for Integrated Scheme for Skill Development has been increased by about 139.3% to Rs 100.5 Cr as compared to Rs 42 Crore in the last year.

CITI Chairman pointed out that in addition to the above, the following budget announcements will help the Textile Industry to revive and grow exponentially and achieve its target set out at US$ 350 bn industry by 2025:

---  Reduction from 5% to 4% on naphtha, a key raw material for synthetic fibres.

---  Under the Interest Subvention Scheme for MSMEs, Rs. 350 crore has been allocated for FY 2019-20, attracting 2% interest subvention for all GST registered MSMEs, on fresh or incremental loans.

---  Government’s decision to introduce Legacy Dispute Resolution Scheme will allow quick closure of litigations which are pending from pre-GST regime. It’s a welcome decision which will allow trade and business to avail this opportunity and be free from legacy litigations.

---  70% of beneficiaries under MUDRA scheme are Women

---  About 30 lakh workers have joined the scheme

Chairman concluded by saying that the textile sector is the biggest employer after agriculture employing 4.5 crore people directly and another 6 crore people in the allied sectors, as pointed out by the Economic Survey tabled in the Parliament.

The Economic Survey also mentioned that Apparel Sector plays a critical role in improving the social dynamics as mostly women are employed in the sector. Above all, the backward linkages of the Sector to the rural economy give huge opportunities to millions of farmers, artisans, handloom and handicraft manufacturers.