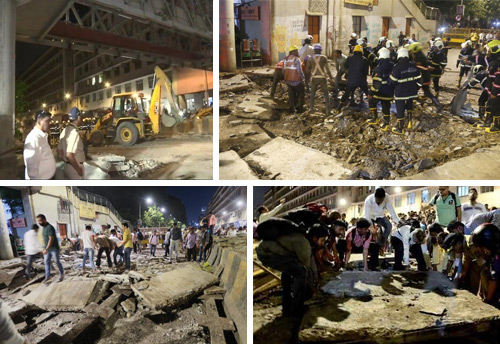 Mumbai, Mar 18 (KNN) After the life taking accident that took place in Mumbai with the collapse of foot over bridge near Chhatrapati Shivaji Maharaj Terminus (CSMT) railway station, industry experts have stressed on the need of use of corrosion resistant sustainable materials including Stainless steel reinforcement while constructing bridges and in infrastructure in coastal areas including Mumbai.

Speaking with KNN India, Chairman of Process Plant and Machinery Association of India (PPMAI) Yatinder Pal Singh Suri said “Because of some commercial considerations, technical experts’ compromise on technical grounds which leads to such mishaps.

He termed the technical dishonesty on part of the concerned officials as worse than terrorism.

Corrosion mitigation is a national mission with full support from our Prime Minister which is amply demonstrated through his slogan of Zero Effect and Zero Defect, said Suri.

Sincere efforts of steel ministry to introduce life cycle cost aspects with use of sustainable materials in construction in government projects which led to amendments in General Finance Rules 2017 which mandates use of sustainable products in our project tenders, he added.

Despite being making efforts to promote right stainless steel materials in construction, industry is not giving attention to the policy guidelines, pointed Suri.

Suri stated “While we spend so much time criticizing terrorism, why such failures are not treated in same manner. When will the government become serious about punishing dishonest public servants who do not follow policy guidelines and take technically incorrect decisions citing lack of funds as a reason.”

The selection of the right stainless steel materials will eliminate corrosion in a given corrosive environment. The new BIS code also mandates selection on the basis of corrosive levels of the operating environment.

The stainless steel reinforcing bars provide long life into concrete structures especially in the hills, coastal areas, ports, airports, bridges, high rise buildings and water treatment plants as these bars do not ever corrode and thus concrete failure due to spalling is avoided, he added.

The other benefits of stainless steel reinforcement include significant increase in durability and reduction in repair and maintenance costs, elimination of concrete sealants and reduction in thickness of the concrete cover, he added.

After the release of BIS code for stainless steel reinforcing bars, Indian Railways has mandated use of ferritic grades of stainless steel in coastal areas for concrete as well as structural bridges due to commercial considerations, said Suri.

Technically, stainless metallurgy dictates that ferritic grades are superior to carbon steel but they will also corrode early in Indian coastal conditions as compared to high end metallurgy Duplex grades.

To avoid corrosion failures and such mishaps in future which lead to fatalities and disruption in normal life, the concerned ministries must use the right stainless steel materials like Duplex, he added.

The bridge collapse near Chhatrapati Shivaji Maharaj Terminus is the third such tragedy in the past two years involving the foot overbridges in the city. Mumbai's suburban railway network, a lifeline for the city's residents, is used by around 8.5 million commuters daily.

On March 16, Mumbai's civic body, the Brihanmumbai Municipal Corporation (BMC), has directed one of their consultants to carry out inspections and review the structural audit report of 157 bridges in city on a "most urgent" basis.

The structural audit is required to be completed within one month and submitted with a detailed investigation.