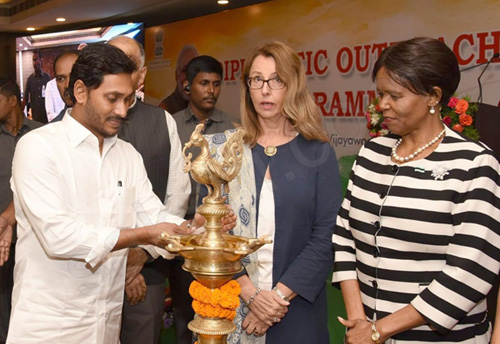 Addressing the delegates of over 30 nations at the Diplomatic Outreach Programme, jointly organized with the Economic Division of the Ministry of External Affairs (MEA) here, the Chief Minster has explained in detail about the trade opportunities in various sectors and at the same time defended the government policy on Power Purchase Agreements (PPAs) and the law to provide reservations to locals in industries.

He stated “We love to collaborate in infrastructure development, oil refinery, steel plants, water management, interlinking of rivers as ours is a Riparian State, clean drinking water plants and reforms in transport system by phasing out diesel-run buses and moving on to energy-powered buses. We also plan to give a boost to maritime economy where the opportunities are wide open for investment.”

“We have four ports and another four will be coming up in the coming five years which will be providing investment opportunities besides setting up of Metro Rail in Visakhapatnam, Vijayawada and Guntur. We have six airports in the 13 districts," he added.

Strongly defending the cancellation of Power Purchase Agreements (PPAs), he said, "This is a tough decision we had to take, the renegotiation of PPAs will go on to instill confidence among the investors, though in the short run there could be some concern from the international community."

The other side of the narrative of cancellation of PPAs other than what was reported is that the cost factor has been going upward, he mentioned.

He said “We have reviewed the energy situation after taking over and we found out that Discoms are not in a position to pay the bills. Over Rs 20, 000 crores were pending from the past 20 months. If the deal continues and power is being purchased at a higher rate, it will reflect on the cost and the new investor has to pay more.”

He added, “We are honest enough to tell the reality and we are firm in our policy of renegotiating PPAs as such a move will instill confidence among the investors as we cannot procure power at a higher cost. We had to take bold decision and that is what we have done.”

Commenting on 75% reservations to locals in the industries, he stated “We are pursuing with the policy of promoting industries in the backward areas. We also have put forward a policy of setting up of Skill Development Centres at every Constituency level. What we are asking for is to give us a list of your requirements and we will train them to suit to your standards.”

We are not asking for any funding from your side. What we are asking for is help in faculty and training so that we can provide you with a skilled workforce, he said.