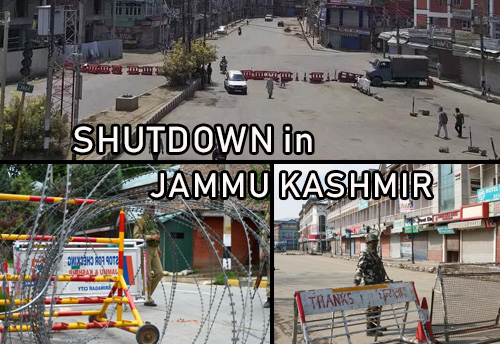 Jammu, Aug 22 (KNN) With no internet connections, the micro, small and medium enterprises (MSMEs) of Jammu region have another problem now. They have lost connectivity with their buyers in Kashmir valley resulting into piling up of their stocks and blockage of capital flow.

Different industry associations of Jammu region met on Wednesday to discuss this. They pointed that no internet service in the region has led to piling up of stock, no access of entrepreneurs to tenders, missing the dates for filing various returns etc.

The entrepreneurs said that due to stoppage of internet services across the state, the industries supplying goods to Kashmir valley have been hit.

“The unit holders have no contact with the buyers from Kashmir Valley resulting into curtailment in the production and huge quantity of stocks piled up with the industrial units due to which the Working Capital of the units stand exhausted as they are not able to pay the GST/Power Bills/Bank Interest on Working Capital and Term Loan in near future,” Mahajan said.

The MSMEs in the region are also facing financial crunch as their hundreds of crores of payment is blocked with the Power Development Department since last few months for the supply of materials under the Sobhayaga Scheme of the Government of India, the entrepreneurs present in the meeting said.

They added that the Bills are pending with the Department due to some procedural delay despite the facts that the materials were supplied by the unit holders as per the delivery schedule.

“It is unfortunate on the part of the Power Development Department to withhold the payment of Industrial Units in spite of the facts that the Funds already released by Govt. of India to PDD under the said scheme,” said the members present in the meeting.

With respect to reimbursement of CGST/SGST and 2% Refund Claims in lieu of CST to the industrial units, the members highlighted that claims of hundreds of crores is pending with the State Tax Department due to non-release of payment by Finance Department to Government Treasuries.

The MSMEs have urged the Governor to get their issues addressed to ensure capital flow in the sector. (KNN Bureau)