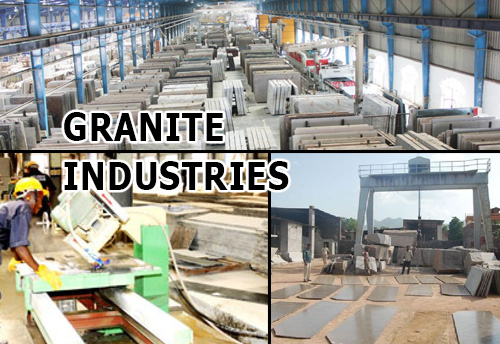 According to a mines and geology authorities report, granite production dropped by 50 per cent in the last few weeks in in Karimnagar, a district known for its tan brown and varieties of granite.

Due to lack of demand, granite agencies are shutting shop one by one. There are now only 50 agencies as against 290 which used to do roaring business.

To get insight of the matter, KNN India spoke to Anil Reddy Vennam, President of Federation of Telangana and Andhra Pradesh Chamber of Commerce & Industry (FTAPCCI), who cited numerous reasons for shutting down of the granite industry in the state, one of which was the market scenario at present.

He said, ''Granite industry is shutting down because of the poor market, infrastructure is not taking place, housing projects are not going as per the schedule and power tariff is on higher side.''

Apart from citing these reasons, Vennam went further and alleged that "Labour has become expensive as we have to pay them nearly Rs 500 to Rs 1000, whether they work or don't work. Areas like Mandal headquarters and surrounding villages has become very expensive in terms of labour charges.

''Normally, they are (Labour) supposed to work for eight hours but they hardly for four to five hour and they take break for almost two and half hours," he added.

He further pointed that, ''We have already approached the government six months back and certain issues are there to which government said that they will look into the matter, but till now nothing much has been done in this regard.''

''Sustainability will depend on profit and loss,'' he stressed.

'Revival, will only take place based on the government's commitment for the same. As an industry body all we can do is that we will put some more focus to come out of this situation but when sales is not taking place there is nothing that we can do, he added.

According to media reports, already more than 100 industries are on the verge of closure. The industry is appealing to the government to come to their rescue by providing concessions on royalty and GST.

The government gave 40 per cent concession on royalty till recently but this ended last month. As there is no concession from this month the industry is once again facing problems as they are already suffering from lack of demand for their product.