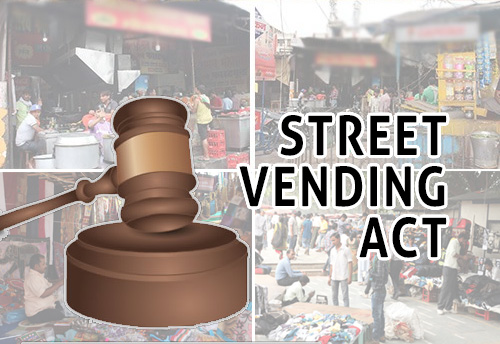 New Delhi, Oct 7 (KNN) National Association of Street Vendors of India (NASVI) President Arvind Singh has alleged that the Street Vending Act, 2014, which provides legal protection to street vendors and hawkers is still on papers rather than to be implemented on ground.

While speaking to KNN India over the security of street vendors during the festive season, Singh said, "It is still on papers, completely on papers. As per the act, the eviction is not allowed till the time Town Vending Committee (TVC) is not formed to conduct  survey  and accordingly gives out the licences to the vendors but these things are not being followed.''

''Municipalities, police and other bodies often target these vendors in several areas and evict them thinking of them being incompetent. They often ask for money (Hafta) or take away the items for free showing their strength to them with no legal sanction. Despite having such a great act, if these things are taking place, then it’s of no use,'' he alleged.

Commenting on the recent announcement by Delhi Chief Minister Arvind Kejriwal to implement the Street Vending Act, 2014, NASVI president pointed out that why after the five years of the introduction of the act and .i.e. also when the elections are around.

''Delhi CM's recent announcement to implement street vendors act and setting up twenty-eight town vending committees, each having 30 members, why these things are taking place when the elections are around, he asked adding that since the introduction of act, vendors condition hasn't been improved, of course, it improved on paper which informs about various rights exercised by vendors,'' he further said.

On being asked that what steps are being taken from NASVI to educate vendors about the act and their rights, Singh said,'' Most of them have a clear idea about the street vending act but we, from our end, keep organising  training camps regularly to inform them about this act, and apart from this we also ask them to maintain basic hygiene so that they can easily able to attract more customers.''

''Lot of vendors are also a part of TVC members,'' he added.

Street Vendors Act, 2014 is an Act of the Parliament of India enacted to regulate street vendors in public areas and protect their rights. However, since its inception is still on paper.

In September, Kejriwal announced the national capital will soon become the "first state" to implement the Street Vending Act, 2014, to provide legal protection to street vendors and hawkers.

"Delhi will become the first state to implement the Act. Under it, town vending committees have been set up and a notification has been issued," he said.

Twenty-eight town vending committees have been set up, each having 30 members.

Twelve members have been elected from among street vendors and hawkers. The rest are officials who have been nominated, he said.

The civic bodies were asked to conduct a survey of vendors through their respective town vending committees.

After the survey is completed, street vendors will be given certificates and thereafter, licenses bearing the name of the owner, address and the place of vending, Kejriwal said.