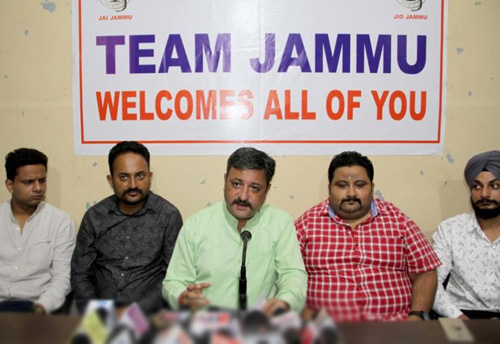 Jammu, Aug 12 (KNN) Narrating the abrogation of Article 370 as a historic decision by the Government of India, Team Jammu, a charitable trust, has stressed for constitutional measures in line with the pattern of neighboring Himachal Pradesh to protect job security of locals and their cultural identity.

The association is focusing on the socio-political developments in the entire Jammu Province and is working for the upliftment of the people of Jammu irrespective of their caste, colour, creed and religion.

Speaking at a press conference, Team Jammu Chairman Zorawar Singh Jamwal said the abrogation of Article 370 had ended the special status of the elite families in J&K, who had been directly or indirectly ruling the state and blackmailing the Centre for the last seven decades.

Predicting that abrogation of Article 370 and new arrangement of two Union Territories would help the Government to restore permanent peace in the trouble torn J&K and usher an era of development.

Chairman Jammu chief said that a new ray of hope has now emerged for Jammu people, particularly youth, who were earlier in dark about their future because of rampant corruption and nepotism in the State.

While endorsing Prime Minister’s announcement that statehood would be granted after the restoration of normalcy he said that even as people of this region have been very rightly demanding a separate Jammu state.

Because of injustice meted out to them by the successive Kashmir-centric governments, we are hopeful that under the new arrangement, equal opportunities will be provided to everyone without regional discrimination, he added.

Highlighting the injustice meted out to West Pakistan Refugees, Balmiki community and gender discrimination under Article 35-A, Zorawar Singh Jamwal said there was no example of such human rights violations in a civilized society.