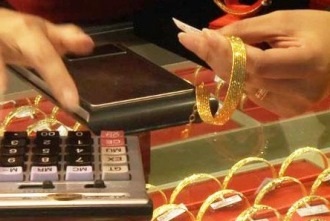 The result is that there are several instances where jewellers have stopped domestic manufacture and are resorting to jewellery imports.

Loss of employment is a direct fall out of manufacturing dis-incentives in the domestic jewellery market.

After value addition, the overall duty comes to 11.5 per cent on both gold and finished jewellery, thus making better sense for retailers to import jewellery rather than pure bullion.

The Gems and Jewellery Export Promotion Council will soon take up the case with the Commerce Ministry, media reports suggested.

Meanwhile, due to cumbersome RBI guidelines, gold imports have largely been halted.  In this regard, the Commerce Ministry has taken up the cause, urging the Finance Ministry to relax norms.

Regarding the requirement of providing proof of export before allowing import of gold consignment, the Commerce Ministry feels the clause is restrictive and cumbersome for manufacturing.

The Reserve Bank last month had imposed restrictions on gold imports by banks and other authorised agencies in an effort to contain current account deficit (CAD).

“It shall be incumbent on all nominated banks/nominated agencies to ensure that at least one fifth of every lot of import of gold (in any form/purity including import of gold coins/dore) is exclusively made available for the purpose of export.

“Such imports shall be linked to financing of exporters by the nominated agencies (i.e. average of last three years or any one year whichever is higher). Further, they shall make available gold in any form for domestic use only to entities engaged in jewellery business/bullion dealers supplying gold to jewellers,” it said in circular dated July-22.