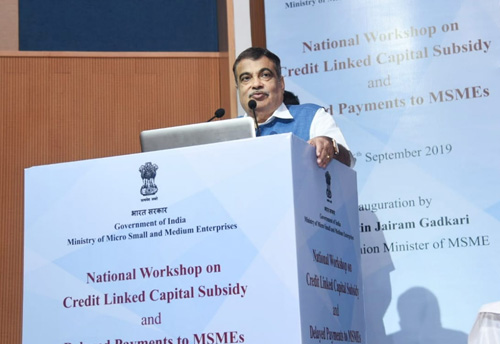 While speaking at the Workshop on Credit Linked Capital Subsidy, the Minister said,’’ MSME contributes 29 per cent in country's Gross Domestic Product (GDP).  Apart from this, 40 per cent export is being carried out by this sector and so far 11 crore people have got jobs with the help of this sector.’’

‘’We have decided to extend this 40 per cent contribution to 50 per cent in countrie's GDP and we will add an extra 5 crore in existing 11 crore,’’ Gadkari added.

The Minister also noted the major problems in MSME sectors i.e delay in payment which blocks the working capital and said that due to this, the industries are suffering. However, he assured that Indian government will take necessary steps.

‘’Due to the delayed payment in MSME sector, the maximum industries go through obstacles and eventually they collapse. Some suggestions and presentations have been brought into our notice for the betterment of the MSME sectors and we have also spoken to the Finance Ministry and I assure that the Indian government will take necessary action," Gadkari said.

‘’The most significant thing is working capital and this is as important as oxygen for human beings. Who is defaulter? How many people are there? How much money is there? These questions are important but at present we don’t have an answer," the minister added further.

‘’I tried a lot to find out the exact figure from this, but so far we haven’t got the exact figure. There are many undertakings both in central and state government and this figure is quite a large and also its a biggest obstacles of our growth. We need find a solution through innovative model,’’ he said. (KNN/ AC)