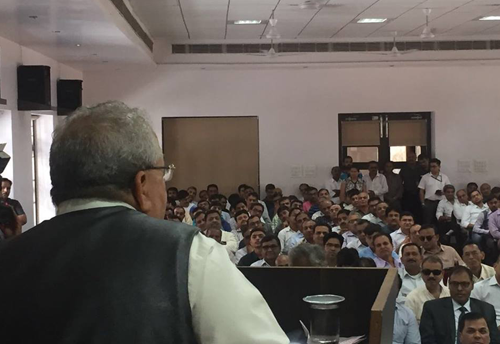 UP, a state which would have assembly elections next year had a glorified legendary brass industry which today is witnessing a mammoth load of problems.

Talking to KNN Gagan Katyal, the CEO of Bakson Enterprises said, “There has not been any improvement in the brass industry as a whole. In fact, the current regulations have further slashed the duty drawback rates or incentives on exports by 5% thus driving down the export incentive from 7% to 2% for all the metals.”

Moreover, “the overall slowdown in the European market and lower demand for metallic goods especially the brass ones is a further assault on the Brass industry. Apart from this there have been two major industries oriented problems in UP which are further taking its toll on the MSME entrepreneurs here,” said Katyal.

“Inadequate electricity supply and insufficient workforce at the desired wage rate are the two other problems apart from slash of the incentives to the metal industry” said the entrepreneur.

As told by Katyal,”The local labourers prefer to drive an e-rickshaw or be self-employed in any other field rather than working in the dying metal Industry especially the Brass firms. The huge wage cuts due to already declining demand of brass and even other metals like aluminium, steel etc in the current European bumpy market make it unsuitable for the labour to work for.”

Thus, all these issues if not attended by the MSME ministry and other higher authorities are sure to take the respective industry to an even tougher phase. (KNN/ GK)