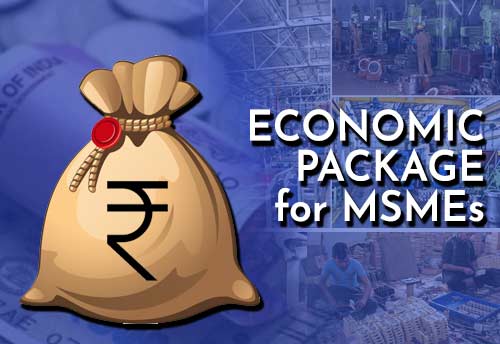 New Delhi, Jul 28 (KNN) A parliamentary panel studying the impact of COVID-19 on Micro, Small and Medium Enterprises (MSMEs) has recommended the government to unveil a larger economic package aimed at bolstering demand, investment, exports and employment generation to help the economy, including MSMEs.

''Even as the government had announced a stimulus package last year for the economic revival post-Covid, it has been “found to be inadequate as the measures adopted were more of loan offering and long-term measures instead of improving the cash flow to generate demand as immediate relief,” said a report by the department-related Parliamentary Standing Committee on Industry tabled in Rajya Sabha on Tuesday.

The report noted that in the process of economic recovery post-first wave of the pandemic, the second wave even more vigorously ripped the economy, particularly the MSME Sector.

The government had last year launched the Rs 3 lakh crore Emergency Credit Line Guarantee Scheme (ECLGS) — as part of the Rs 20 lakh crore stimulus package – equivalent to 10 per cent of India’s GDP – to help MSMEs recover from the COVID impact.

The Committee noted that based on the written replies furnished by the Ministry, no intensive study has been conducted by the Ministry of MSME to ascertain the actual losses suffered by the MSME sector as a whole due to nationwide lockdown imposed by the Government.

''More so, the second wave of the Pandemic exposed the vulnerabilities of MSMEs like never before and highlighted the problems faced by them such as delayed payments, high informality, low financial resilience, scarcity in raw material availability etc,'' the report said.

The Committee, therefore, is of the opinion that a detailed study needs to be conducted to make an assessment of the actual losses suffered by the MSME sector so as to chalk out an effective plan for revival of the MSME sector, which has the potential to contribute significantly in achieving the much-coveted target of making India a 5 trillion dollars economy.

Former MSME Minister Nitin Gadkari had reasoned in February this year in Rajya Sabha that data regarding temporary or permanent closure of the units due to Covid is not maintained by the MSME Ministry as ‘MSMEs are there in both formal and informal sector.”

Last September as well, former MSME MoS Pratap Chandra Sarangi in the Rajya Sabha had said that “no such record is available” for the number of MSME units shut down during the March-August 2020 period of the pandemic.

''In fact, there is no data with the government on the number of MSMEs closed down from FY15 to FY20,'' Sarangi had added.