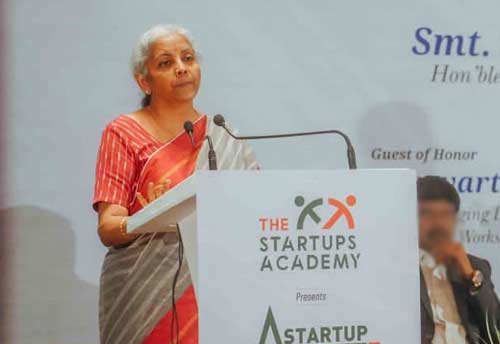 Speaking at 'Startup Dhruv' awards to startups in Coimbatore region on Monday the FM criticised the schemes of previous governments and said that it was PM Modi who created opportunities for private sector to manufacture products.

The Minister said that the previous laws limited opportunities and the aspirations of core industries as earlier license quota was the norm which only allowed public sector units (PSUs) to manufacture products.

Emphasising on the policy changes benefitting private sector, particularly MSMEs, she added that barring a few strategic sectors, the sector can work together with PSUs in defence, space and atomic energy sectors.

Appreciating the startups in Coimbatore, Sitharaman suggested them to utilise the 'Web3 world' to develop their businesses and take the country forward by taking up core sector projects.

Encouraging startups to use Web3 she said that we expect core industries to go from using some random patented innovative thoughts to using Web3.

Web3 is a term referring to applications and websites on the internet that are built using blockchain technology.  (KNN Bureau)