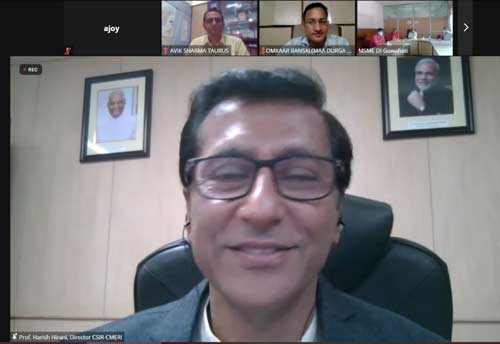 Prof. Harish Hirani, Director, CSIR-CMERI, was the 'Chief Speaker' for the virtual event. Prof. Harish Hirani, Director, CSIR-CMERI, Durgapur, informed that the thrust towards the 'Water Purification' initiatives of CSIR-CMERI started in 2016, and the Institute was awarded the CSIR Technology Award in 2017 for this purpose. After that, the CSIR-CMERI is continuously working upon 'Incremental Advancement of Water Technologies'.

Participating in the webinar, Debabrata Mitra, Joint Director & Head MSME DI Guwahati stated, ''The Ministry of Drinking Water & Sanitation has been providing financial assistance to the State governments in providing the drinking and potable water. Presenting the statistical data related to Assam State he mentioned that only 43.8 per cent of rural households in Assam have access to safe drinking water and the rest are still using untreated water which is miserable. Hence, we should enrich ourselves with the CSIR-CMERI developed water purification technologies so that rural masses with the help of MSMEs can benefited in the North East region.''

Sunil Kumar of MSME TC, Kolkata made some queries about the water purification technology for radioactive elements, if any. He also informed that he has established a Lab for which CSIR-CMERI has provided R&D services in the past. He wished to organize a similar programme with CSIR-CMERI in the coming days.

Avik Sharma from Taurus enquired about the technology for the Anganwari Centres for which it was advised that Community Level or High Flow Rate technology would be effective. He stated that as the flood problem is huge in the Assam region, he wishes to work with CSIR-CMERI for providing its solution and for ensuring drinking water.

Dr. Arijit Banerjee shared his journey in the field of water purification technology particularly his contribution for the ‘Bio Toilets’ at major construction sites in the country for which sometimes he is so-called as Toilet Man of Bengal.