9 Tips To Transform Weekend Adventurism Into A Profitable Startup 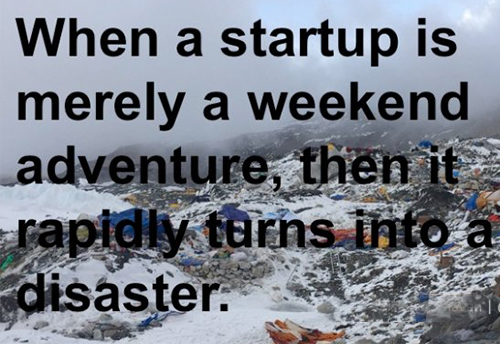 9 Tips To Transform Weekend Adventurism Into A Profitable Startup

Today startups are being kick started at an unprecedented rate, especially in India when the government itself has announced attractive schemes for StartUp India and StandUp India.

Along with the technology and manufacturing startups, a new breed of "community driven micro-finance startups" are on rise. This is certainly a positive trend, that group of colleagues, friends, relatives or acquaintances in a given community are flocking together to start a new venture, where in they pitch-in their savings.

However, majority of these startups also fail over the period of time, especially those "community driven micro-finance startups". One of the major reason for failing of such startups is an attitude of merely a weekend adventurism.

What is a mere weekend adventurism?

Weekend adventurism is a term that I coined to describe the implementing on-the-fly thought without proper planning and preparation. For instance, a group of friend is sitting in a cafe over beer, and then one of them sprung a thought of starting a inner ware manufacturing unit, and export it across the globe.

It is on-the-fly enthusiastic thought and something in which a deep and wide planning, assessment of pros & cons is missing. But then others like it, then the enthusiasm spread like viral fever in the group. Someone comes with so called business plan, others pledge to support or participate. Many think it is a good way to keep their spouses or unemployed family members busy into it. Others join because they have a saving, which they have been thinking of investing into something with a wishful belief that it will multiply faster.

It is exactly similar to a person who has no idea of kitchen and cooking announcing to prepare food for large group of friends or family, simply because it is weekend and he/she has sometime to kill. This whole ad-hoc, off-the-cuff approach and attitude is what I call a "mere weekend adventurism".

Whats wrong with a mere weekend adventurism attitude and startup?

I have nothing against the weekend adventurism. In fact, when I have a free time I enjoy and encourage the spontaneity of the weekend adventure to have some fun and soulful time. For instance, going for a trek, cycling, movie, swim or even shopping. However, these are onetime activities with a clear understanding that it is just a onetime investment into a onetime fun and pleasure. There is a clear assessment of risk and benefits - at the most you will loose a day and there is a likely chance of your pocket becoming a bit slim.

However, when you kick start a startup, you are investing into a dream. A dream of being successful, being wealthy, being popular or being recognized. You are putting your life and its earnings at risk. You are also putting an emotional and intellectual energy. When so much is at stake, it can't be an ad-hoc, off-the-cuff decision at a sprung of a moment, simply because idea is great and orgasmic. Idea may be great and erotic, but are you ready for it? Is it for you? Do you have all that takes to succeed in making that idea a reality? Are you really prepared for it? Is it a right time for you to invest into it now? Have you consulted your family and loved ones?

If the answers to above questions is NO, then you are starting on a weak foundation, unstable understanding, and with un-prepared mindset. This is what I feel is wrong with a startup based on mere weekend adventurism. As you would realize, such a venture has more chances to fall apart soon, rather than to soar the height of unlimited success.

However, the next logical question is 'how can I transform this weekend adventurism into profitable as well sustainable startup?'.

How to transform weekend adventurism into a profitable & sustainable startup?

Here is my quick laundry list as to what needs to be done to ensure that your weekend adventurism thought of a startup transforms into a reality, and takes shape of a profitable & sustainable venture.

1. Do not commit immediately, but simply express an interest into an idea.

2. Go back to your study room, and get into a researcher or investigators role. Google out if such an idea has been implemented else where or not?

3. Do a lot of reading to understand the inventiveness and uniqueness of the idea, its pros and cons from a business point of view.

4. Consult or discuss with the startup experts, mentors, share the idea with trusted friends, colleagues and get their views.

5. Assess if this is a right time for you to jump into it from all possible angles - professionally, economically, from a time management point of view, from a status of relationship point of view, emotionally. Most importantly ask a question "Are You Ready to Give Your 100% for the idea, and for its success?".

6. If the idea of a startup is yours develop a background paper with 'Why this Startup?', 'What is so Inventive or Innovative or Unique about it?', business plan with vision and Mission, objectives, mile stones, risk assessment, evacuation plan, potential investors, how does it fit into purpose of my life? Not only you prepare this for yourself but also share with other members who have shown an interest.

7. If the idea of a startup is not yours, then demand for a detailed background paper as described above from who so ever proposed the idea, before you commit to it. Don't rush, take your time to study it. Make notes, ask questions. Don't shy away from asking tough and uncomfortable questions. After all, you will be investing a lot into it. There are no silly questions - all is fare in love and war, and startup is a venture of love and war in many ways.

8. Revise the document collectively. Put down roles & responsibilities of each one of the founding members of this venture. Don't keep or leave gray areas. Don't shy away from saying NO or questioning a team members ability or credibility for a task he/she is taking up.

9. Even before you sign on the dotted line and put your contribution on table, draft a vision & mission statement that is agreeable to all partners. I would go a step further and demand for a startup pledge to be drafted that brings in higher degree of commitment from each founding members.

These are some of the early steps prior to committing to a startup venture.

Why I propose such an academic approach?

Many of you may feel that what I have described is a bit stringent academic approach and all this is not essential - after all we all know each other and we are friends?

Friendship and professionalism don't go together especially when finances are involved in it. Thus, it is better to be clear about even a smallest doubt at the beginning itself - rather than regretting later on.

With my experience of witnessing startups rising and falling, I can say with great degree of confidence that above referred approach may sound academic and time consuming, but it is your insurance to save an accident to happen.

Startup can be a weekend investment with vision, planning and meticulous implementation. Then has a potential to soar to a height of unlimited success.

About the Author: Vishwas Chavan is the author of the best selling book "VishwaSutras: Universal Principles for Living".

Vishwas can be reached at vishwas@vishwasutras.com

Vishwas Chavan
Vishwas Chavan is the author of the best selling book "VishwaSutras: Universal Principles for Living". Vishwas can be reached at vishwas@vishwasutras.com.