The ‘Power’ of the seas : Ocean Renewable Energy 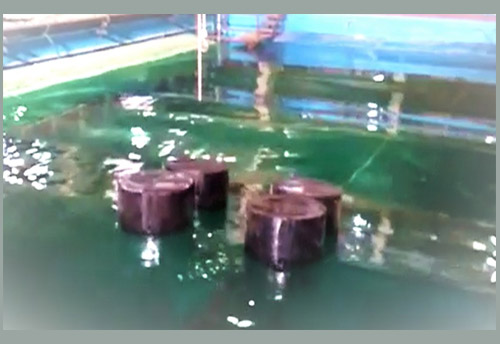 The ‘Power’ of the seas : Ocean Renewable Energy

The rise of spring tide in Gulf of Khambat is over 10 Meters. Few other locations in the world have such large tidal ranges. This is nature’s way of providing us a large amount of ‘power’ every few hours and taking it back, since we have not learnt to harness it.

The ocean provides us ‘power’ to harness in a few forms. Waves on the surface, ocean currents, tidal streams, rise of tide and of course the thermal inversion.

Many attempts have been made to harness ocean wave energy, the seemingly simplest of them. If you search for images of ‘Wave energy harvester’ on the net, there are dozens of images. But most of them are illustrations of ideas, untested by prototyping. The photographs of a few that have been prototyped, are those that have made the technical cut, but are struggling to make a good commercial case in order to inch towards economy of scale. This is common at the infancy of any technology.

There are dozens of ways how the energy on the surface waves can be converted to useful forms. This can be done by rotating a shaft of any turbine or generator or by pumping air or hydraulics. The energy is definitely out there in abundance. Those who go out to sea, know the power of the waves. It can bend steel pipes and break up a ‘non-seaworthy’ vessel.

Wave Energy Converters (WEC), where part of system is seated on the seabed have logistical challenges of deployment and siting*. Floating versions of the same can be assembled in port, wet towed to location and anchored. Most countries with a coast have a large fetch and waves bring a lot of energy to the coast. It is not the breaking waves on the beach, but the unbroken waves a few dozen meters away that represents this energy. Wave energy is very space efficient as compared to solar, that makes it very suitable in many locations.

Tidal energy is a very reliable source of power. Unlike the wind and wave with their seasonal and unseasonal variations, tides are very predictable years ahead. That will make the production predictable and plan the consumption cycles. Since tides predominantly follow the moon, there is a time lag every day and not the easiest to sync the power production and the human consumption cycles. Storage of energy becomes absolutely necessary to smoothen the power yield and demand curves.

While rise of tides is the potential energy, the tidal streams are very interesting aspect of this tidal movement, representing the kinetic energy of the tidal action. The movement of water in one or opposite direction brings about the rise and fall of tide. A turbine kept on the path of this stream will generate power. It has to be able to pivot around or generate power both directions since that is the nature of tidal streams. There is one snag. The tidal stream weakens during change of tide and a part of the cycle around the change of tide is below the threshold of generation. The production is interrupted every change of tide and once again energy storage capacity becomes absolutely necessary.

A lot of wind farms have moved to the sea in some geographies. This is mainly where land is scarce, better yield of wind power is available over the sea, and where the uninterrupted view of the horizon is a touchy issue. Most offshore installations currently are fixed turbines in shallow waters. But recent trends are to deploy huge floating wind turbines in deeper waters.

A lot of hybrid models are being assessed, be it wind and solar or waves. The net search will throw up many such attempts. There are contradicting resource and environment requirement for each of these models. There needs to be a clear synergy if two resources were to be harnessed by the co-located system. Else the attempt will fizzle out after the media hype dies down.

In short, the energy is out there. We are blessed with a long coastline with monsoon winds and a huge tidal rise in Gujarat coast. What are we waiting for? We have to think beyond solar and wind now, to cost effectively harness ocean energy in ten years’ time. If we are not smart enough to harness it in our lifetime, of course the next generation will.

*AlphaMERS has prototyped and tested a wave energy harvester with a seabed component and floats. Now it is developing a floating version of the same system.  AlphaMERS is designing a wave powered boat as a small unmanned floating platform for payloads of surveillance and security equipment. This is designed as a small boat with extraordinary cruising range. The firm is also studying feasibility of floating wind turbines with the generator at the sea level. D C Sekhar, the author of this article is the founder of www.alphamers.com