Why GST is Getting Surat Terrified 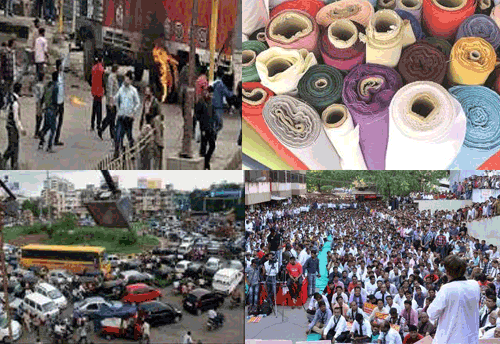 Why GST is Getting Surat Terrified

Starting the 27th of June, the MSMEs belonging to the Textile Industry in Surat have been in a state of shock! They quickly tried to figure out what hit them - got scared to no end doing so - took to the streets, processions, dharnas, fasts — even withstood a Lathi Charge — all within a week! GST surely is Getting Surat Terrified!

To understand why this is so, we need to first understand a bit about Surat.

Surat is the polyester capital of India. Buy a Saree, Salwar Suits and Kurtis any where in the country and chances are that it has a link back to Surat.

The Surat textile industry is full of migrants - people from all over the country (other cities, more from small towns and villages) have migrated to the city to serve their native market. Over the years this additional demand resulted in the growth of the entire sector - and a few of these migrant units grew to a large scale. Most however, stayed small. The barrier to entry was and is zero causing a continuous influx of migrants from all over the country. Any one from a small village could come in to Surat, take a small 160sq ft shop on rent (basis reference of some one from his native already settled here) to start his business operation within a day! Ease of doing business was at all time high here!

Surat has thousands of weavers - (those who convert yarn to fabric). Around 450 process houses (engaged in printing and dyeing of fabric).  Thousands of embroidery units, stitching units and lakhs of people employed in the checking, packing, cutting, transportation — and thousands of agents, arhatias, brokers, commission agents aiding each step.

The key about the Surat value chain is that it lacks Integrated units — not that they don’t exist - but that they are the exception. GST is a boon for the Integrated players and they are not complaining at all! The norm in Surat, however, is for the migrant trader to buy greige from the weaver, send it for processing to a process house, send it to a embroidery unit, then send it to value addition multiple times before the product is ready to be packed and sold to his native market.

It is worth noting that the value chain is a buyer’s market all the way. Over supply at each step is the norm. (Reason? Zero barrier to entry at the migrant trader level, and it’s these traders who’ve “graduated” to other parts of the value chain - often to escape competition at their previous link).

Given the above, it is easy to see that these migrant traders drive the value chain. They place the orders at the Weaver, the mills process their orders, and so on in other parts of the chain. These migrant traders started with zero or very little “books capital”. The taxation and the attitude towards taxation ensured that even when they made money, their books capital stayed low — and a parallel economy bloomed! The nature of the value addition required (lace stitching, diamond sticking, hand work etc) and the kind of people executing them (often house wives at their homes) meant that there were lots of avenues to deploy the cash capital. The fact that nothing except income tax was applicable effectively meant that book-keeping was an annual exercise - reserved to be driven by the CA!

Competition, however, is another story. The zero barriers to entry meant more and more competition. This created a large section of migrant-traders who stayed small - and cut corners everywhere to survive! Tax evasion was just one example of such “cost-cutting”.

Goods so produced are typically sold via agents in the native market. The buyer downstream is just as disorganised. Returns are high. Often goods are sent to the agent on a consignment basis. Unsold. To be sold - and invoices created after the agent informs who he sold the goods to and at what rate/discount — sometimes as late as 60 days after dispatch! The high competition also means that even a small migrant-trader deals with multiple agents and keeps switching agents even for the same customer!

With the introduction of GST, the entire value chain breaks down — and will need to re-organise in a big way!

The weavers buy yarn with 18% GST, sell fabric with 5% GST. This renders them totally uncompetitive against an integrated player who will be able to sell fabric almost at the cost of the yarn used. (100 Yarn + 20 Conversion + 6 GST = 126 for Integrated, 100 + 18 (GST) + 20 + 7(GST) = 145 for weaver). No ITC Cash refund system for the textile sector ensures that he will not be able to benefit from the yarn GST credit lying with him! There are thousands of weavers facing this!

Imports have become cheaper: Post GST, you can import fabric @ 15%. Earlier it was @27-29%. This is another nail for the weaver! Not only has GST rendered him uncompetitive against local integrated players, it has taken away the protection that the government provided via import duty!

The migrant traders owing to his scale buys from the local weavers. His costs are bound to rise rendering him uncompetitive.

All transactions need to be reported. Purchases need to be reconciled with the supplier on a monthly basis. This will mean that even even the smallest of traders will need to invest in a full time accountant and be far more organised. The issue may appear frivolous. After all, who runs a business and not even invest in keeping books properly? Welcome to Surat! For the large section of small migrant-traders of Surat, this change itself requires a change in mindset and a recurring expense that they would rather not do!

Transaction level reporting as mandated by the GST will mean that the booming parallel economy will collapse! Cash Capital that the trader generated over decades can no longer be deployed in his business. The thriving parallel economy was a tool to cut costs will collapse! GST almost forces that you buy from organised players, and this will, in the Surat’s textile sector, mean that the cost of purchase for these migrant-traders will go up! Bank loans will increase - servicing them will be additional cost for the trader.

The thousands of housewives working from home stitching laces, sticking diamonds could lose their jobs — lest someone amongst them organises them into a GST compliant outfit. Even when that happens the costs of the chain increases!

Sales in other states via agents - when goods are sent unsold and later sold by the agent, as per the GST Law, requires registration in each state! This means more compliance, more costs!

No Input Tax Credit Refund to the textile sector - effectively meaning that each and every item is now 5% more expensive!

Provisions of jail term, audits, inspectors - those mentioned in the GST Law have only served to escalate the fear in the minds of the the Surti Trader! The trader has till now been exempt from all taxes (except income tax) - 99.9% are not even covered under ESIC, PF or any other such tax/levy/fee. Fear of being harassed at the hands of the inspector in the GST regime drives them to revolt!

In summary, the traders and weavers, the ones who are up in arms - fear being rendered uncompetitive & jobless, they fear being harassed by the inspectors and getting sucked into a bribe culture (which is non-existent currently!) — it is really a question of survival for many and therefore GST is Getting Surat Terrified!

About Author: Mr Mayank Jain is a textile entrepreneur based in Surat.